They Did It,
So Can You

Hear from coaches from all walks of life, how they turned their passion into a business.

How Would Your Week and Month Be if You Could Quadruple the Number of Sales Each Week and Each Month?

Mark is an experienced advisor, former top lawyer who changed his career. Mark had initially done very well, however, after a number of years in the industry, Mark was struggling to make things happen.

His approach was the same and he was getting the same results.

His income had stagnated and was stuck at the same level year after year.

The results were not what he wanted. Mark was able to get referrals from time to time, however his approach was more ‘force’. This cost him about 2/3rds of his first meetings going to second or sale meetings.

Whilst it gave some success, it was wasting a lot of time and opportunity, and of course income.

Taking the time and effort to see people on a first meeting, only to have 2/3rds of them not go anywhere is a frustrating waste of everything, money, effort, enthusiasm and energy.

By working the parallel system in my program, Mark changed his approach and within 6 months had doubled his income. Almost all of his first meetings were turning to second sales meetings, and Mark was also able to get referrals almost every time.

Mark’s sales ratio went from 0.7 sales per week to 2.4, basically quadrupling his sales.

By overcoming the No.1 problem in our industry, of how to see qualified referrals regularly every week, his time is much more efficient, his success rate has doubled, and so has his income.

If you want the same sort of success and future with control, then sign up for my program, it’s as simple as that.

My program also coaches unique sales presentations which are highly effective, allowing Mark to get even better results from the new level of appointments he has with qualified referrals. 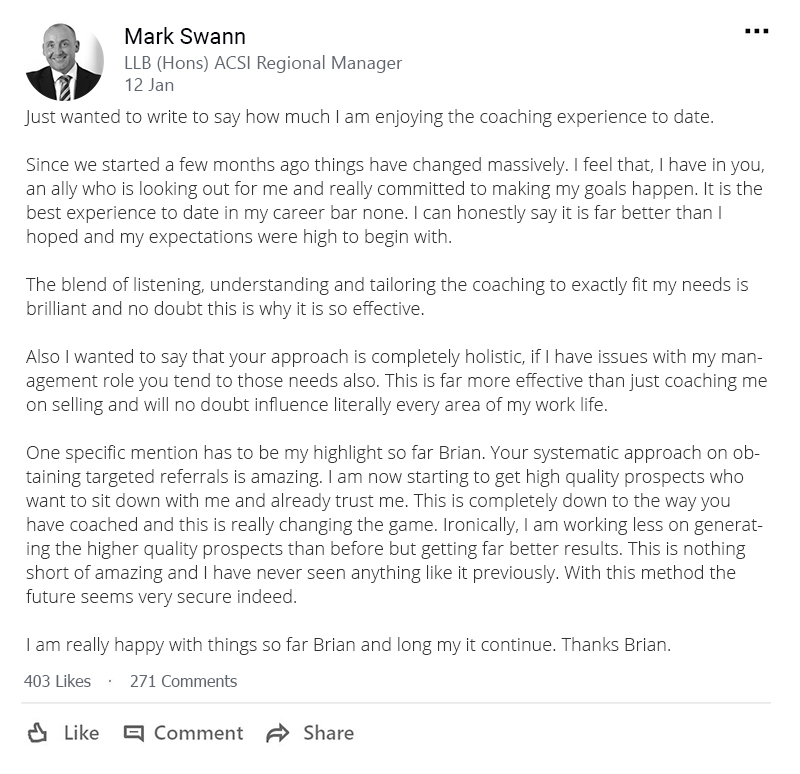 Our design and structure for you and your business to grow.

Have queries? We might be able to answer them for you.